Around Christmas 2013 I was starting to worry about GarageBand.  Since 2006 I had started my beginners on the software, which arguably ignited the entire movement of “older beginner” music composition courses.  2013’s GarageBand 10, however, made me question the direction the software was taking.  I would have to rework many of my lessons to work in the new version.  Since I was already using Ableton Live in my advanced course, I decided it might make more sense to have my beginners use that software instead.

Spring semester 2014 I decided to hedge my bets on this topic.  My course registrations for the second-year class are very healthy, and I did not want to jeopardize that by introducing an unpopular change in the beginner level.  I took one section of the beginner course, and pretended GarageBand did not exist, and we started on Ableton Live instead, doing the same exact projects as the five other sections using GarageBand.  Here’s what I learned:

Really there were no big negatives with the switch, other than a slight intangible fun factor that was not present in the first few weeks.  Once we were off into my projects like the Radio Ad and sampling drum sounds from around the school they class felt exactly right, but there was a bit of magic missing from the first weeks.  After another semester, I determined it was due to the weak loop selection in Live compared to GarageBand.  Ableton loops are not for the faint of heart – many of the “Clips” are exclusive to a specific device or sample pack and do not gracefully drag anywhere as audio files do.  In addition, filenames are inconsistently named, so the search feature is not that helpful for the built-in loops, and there is no fancy metadata based filter system like there is in Logic or GarageBand.  There had to be a way to use those gigs and gigs of Apple Loops sitting on my hard drive already to solve this problem.

So how do we make the loop library friendly in Live?  First off, I just use the GarageBand loop library.  I mean – it’s already there on the computer, right?  Those new loops are especially great.  There are a few hurdles though:

Here’s my step-by-step process to get Apple Loops usable in Live.

Now students have the entire GarageBand loop library (including the amazing Chillwave category), usably tagged and categorized, accessible in a much more loop friendly program.

Since the beginning my music lab has had 25-key MIDI keyboards at each station.  We started with the Korg K25’s and shortly after upgraded to the M-Audio Axiom 25’s we’ve had since 2008.  I’ve toyed around with the idea of adding an unconventional controller to my lab for years, but not a single device fit my needs entirely.  In fact, I’ve purchased several of these as single units intending to use them for the lab, but never felt confident enough to deploy them.

With Akai’s latest crop of hybrid APC devices, I found the perfect tool for my lab.  The APC Key 25 is small (we have limited desk space), includes 100% pre-programmed controls for clip launching and volume adjustment with zero setup, and includes 25 “good enough” keys.  Since we don’t do piano technique as much as we just need a basic note input device, this board is the perfect complement to our Ableton-only curriculum.  It even comes with Live Like Akai edition, which is not far off from Live Intro feature-wise.

Our first week this semester felt magical again.  It was like the old days when GarageBand was novel and people still thought the Secret Agent Guitar loop still sounded cool.  Kids were able to create key-matched tracks and scenes with relative ease in a non-linear way using cutting edge tools and great sounds.  Everyone used the keyboards, and it made life easier instead of harder!  It was easy, fun and ultimately successful.  Just because the tools don’t come perfect out of the box doesn’t mean you can’t bend them to your will.  Setting up a great music tech class is about engineering the environment on the student workstations for optimal success, and that means sweating the details when it comes to things like searching the library or choosing which controller to buy.  Good luck trying this on your own!

Tim Cook takes the stage at Apple Town Hall, carrying a guitar.  After going over company news, profits, iOS8 adoption rates, etc. he proceeds to smash said guitar on the stage, “The Who”-style.

“This is what you all felt like last year when we released GarageBand 10, didn’t you?”  He exits the stage.  Lights go black.

A low bass rumble.  Video starts playing – first a globe.  The globe zooms out into a watch face.  It is the Apple Watch.  A guitar icon shows on the watch.  GarageBand 11 for Apple Watch.  WatchBand. 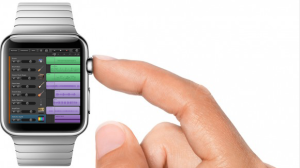 Craig Federighi on stage: “We felt that we really screwed up with GarageBand 10.  To make up for this, everyone who downloaded GarageBand 10 gets a free Apple Watch, preloaded with WatchBand.

WatchBand demo: no controls, no timelines, no UI.  Just press the icon and start air-guitarring, Bill & Ted-style.  A song will appear in your iCloud, pre-quantized and mixed.

“We took GarageBand to the next level.  We heard you.  You wanted an easier program.  You wanted less control.  You basically don’t want to write music at all.  Now you don’t have to!”

Tim Cook back on stage.  “We’re replacing all versions of GarageBand with WatchBand.  Now to make music on your Mac or iPad, just shake the Mac around and a song will magically appear in your iTunes library.  No timelines.  No confusing tracks or effects.  No play button.  It’s magical.  So.  Magical.”

Brief Q&A session.  No questions.  None of the musicians and educators who built their curriculum on GarageBand 9 and earlier are present to ask questions.  The tech press who has no idea what’s going on thinks these are all great ideas.

Apple proceeds to release a ton of cool hardware, all running the new WATCHBand app.  The new Mac Pro can “shake out” 12000 songs per second, all while avoiding confusing things like Track Effects and things like low latency recording.

Tim Cook: “We’re just kidding.  Here’s GarageBand 11.  It’s like a fixed version of GarageBand 10 with all of the features of GarageBand 9.  Extensively tested by musicians and educators alike.  This product was designed from the ground up to be a great starting point for music production, and comes for free on every Mac.”

One day after Jack was announced, Audiobus was officially canonized with its inclusion in GarageBand.  No coincidence that Jack was to be released on iOS and Android, possibly leveling the playing field.  I’d wager this will persuade the team behind Jack to focus less on iOS than Android – a third party (especially a niche like Audiobus) supported in GarageBand is a strong statement of preference by Apple.

It seems that Apple is then going to use Audiobus as the Rewire for iOS.  Smart move, and a big leap from where things were a year ago.  Once it’s in GarageBand, you can be assured it will be supported for some time (Apple similarly adopted Audiocopy last year along this same logic).

The simple interface exponentially increases the iPad’s value as a music creation tool by letting you do all the recording and sequencing on a single device without complex file imports, as well as enabling apps to talk to each other. For example, you could now record a synth track in Korg’s iMS-20, filter it through the Amplitude amp modeler, and record the results as a track in GarageBand.

As a teacher, I heavily rely on the ability to switch back and forth between mirrored and spanning mode for my Mac. I seriously hate messing with Displays preferences during class and fiddling with resolutions and such. Until this summer, Macs were pretty good at quickly switching between these modes, but with the arrival of Mac 10.8 Mountain Lion, the displays menu was replaced with the much more specific Airplay menu, which does not include the old Mirroring toggle. In fact, the key shortcut to enable/disable mirroring (⌘-1) forces a rescan of the displays, often resulting in a resolution change. Terrible!

Luckily, we can re-enable this feature easily with a free app from the Mac App Store called Display Menu by Thorsten Karrer. This app does exactly what you think it should, and it also enables the quick resolution switching that OS X had way back in the day. Everyone chained to a desktop with mirroring mode for their day job needs to get this app, posthaste. Check out more info on the Display Menu website.

Interesting activity going on here at sibeliususers.org.  From their description:

Please join us in convincing Avid that it is in everyone’s best interests for them to sell Sibelius.  This will still ease its cash crisis, but will ensure Sibelius lives on in safe hands.

These lead me to a conjecture: If Sibelius was spun off back into an independent company, it could no longer stand on its own.  A company cannot simply retreat to pre-crisis levels and maintain modernity.  Since 2006, Sibelius (while apparently not generating much profit) had grown into a multitude of educational products, and integrated into somewhat an appendage of Pro Tools.  These projects require more programmers, more QA, more salespeople, etc.  The group (save Sibelius) seems fixated on saving the main UK office, but ignores the reality that Sibelius has changed quite a bit since growing out of that office.

Between this, and the possible hostile takeover possibility happening with MakeMusic, the notational software market could soon be in trouble.  But remember people, this is what drove you to Sibelius in the first place – you didn’t like Finale.  Now close your eyes and imagine an app that integrates notation smartly into the modern music making workflow.  Who will make it?  Does it already exist as a small niche product or is it yet to exist?  Will Finale or Sibelius figure out how to survive this decade?  I don’t know.  All I can say is that I stopped using both programs a long time ago.