For my second iPad music app review, I’m going to do one that hasn’t gotten much coverage lately: O-GAWA.

In short, this app is both very difficult to figure out and at the same time quite simple in what it delivers. It does this with an interesting visual flair.

The main view when you open up the app is what appears to be a black background with some very VERY dim blips in a diamond, circle, square, or um…the Chinese character for “confusing”.

Once you reveal the hidden play button on the top bar of the screen, it becomes apparent that these blips represent a time cycle of some sort.

After playing around with some of the other buttons, I revealed a sequencer view, that looks like a __ step sequencer with a number of unlabeled drum/synth samples. 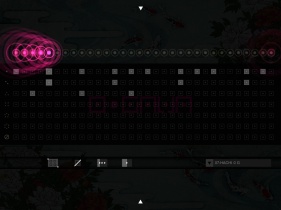 The shortcuts at the bottom of this sequencer view are for things like drawing a select box, deleting samples, and so forth. You edit the sequence in this view, and go back to the other view to do some live “triggering” from different points in the loop. This is mildly cool, but I am not sure how useful this app is on the whole.

This is what I thought until I considered O-GAWA in comparison to something like OM-player or the myriad Max-MSP compiled runtime apps that are out there. They are basically cool proofs-of-concept. Another example is the awesome stuff on quartz-compositions.org. These are showcases by great programmers that are trying to experiment and show a cool way of showing something that’s normally shown in a boring way. In that sense, O-GAWA succeeds greatly.

Check it out on the App store: O-GAWA (free)